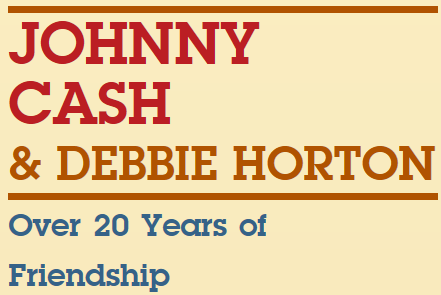 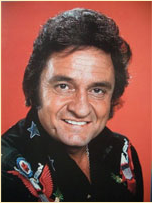 JOHNNY CASH was one of the greatest individuals I have ever known. His influence on my life is enormous. He was always gracious and kind to me and the photos I am sharing with you are only a few taken down through the years. These pictures are very precious to me and it was always a thrill when I had a chance to be with Johnny Cash. The first time I met Johnny was July 16, 1972 and the last time I was with him was in Austin, Texas on December 8, 1994. I miss him so very much. 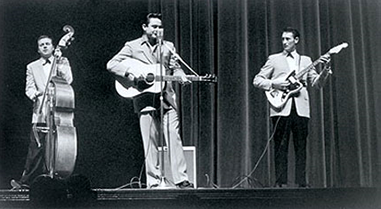 A special thank you to my Mom, Dad and sister for putting up with my running from show to show while I was still living with them. Without their willingness to take me, I would have never had the opportunity to go to many of these shows! Another huge thank you to Lou Robin, Manager to Johnny Cash, for allowing me access backstage at so many shows. The photos on this page were taken all over the place...even in Johnny Cash's Hendersonville, Tennessee home which was recently lost in the fire. (I was invited to have lunch with him and June at their home after my high school graduation).

JOHNNYCASH.COM RADIO aired, for the first time, my performance with Johnny Cash. I must also say a special thank you to my old friend, Bill Miller, founder of JohnnyCash.com and a lifelong friend of Johnny Cash. Bill and I knew each other since we were children involved with the Johnny Cash Fan Club. I would describe Bill as the authority regarding Johnny Cash memorabilia. He has a vast collection of Johnny Cash items and Simon & Schuster, Inc. published a book in 2004 written by Bill titled, "CASH, An American Man". When Bill launched JohnnyCash.com Radio in June, 2007 he called me to be one of the first people interviewed...in fact, I was the third...after John Carter Cash (John & June's son) and Lou Robin (his manager). Bill wanted to air to the world my performance with Johnny Cash. It had never been released before. I am the only woman to have ever played lead guitar for Johnny Cash, and now the world could hear this magical event. (This show was re-aired on January 9, 2008). Every time I would visit with Johnny Cash he would remember that night and he remind me of that special distinction that no one else had. Thank you, Bill Miller, for allowing this special time to be shared publicly. It's hard to top playing guitar for Johnny Cash and there is no way I could tell you in words that feeling.

In February 2012, Johnny Cash would have celebrated his 80th birthday. There was a huge celebration, hosted by Bill Miller of JohnnyCash.com, near Los Angeles, California to commemorate this occasion. BRANSON ON THE ROAD was one of the invited guests along with Johnny's sister, Joanne Cash Yates, W.S. Fluke Holland (Johnny's drummer for 40 years), Johnny Western, Cowboy Jack Clement, Chance Martin and Margie Perkins (the widow of Luther Perkins - the guitarist who invented the boom-chicka-boom sound). What a thrill it was to work with these wonder people and to see them again.

We include a tribute to Johnny Cash on every BRANSON ON THE ROAD show...always have and always will...so I still play Johnny Cash songs on my guitar in every show and I like to think that he's listening again. I hope to see you at one of our shows...somewhere down the road.

BRANSON ON THE ROAD 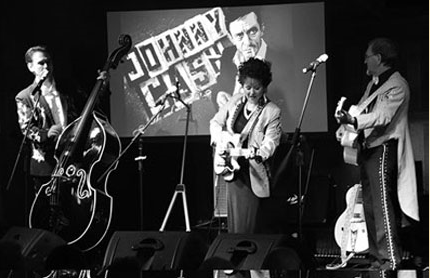 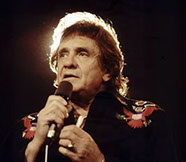